My six-year-old can be a little asshole with her talking back and bitchy little ways.

Shut up you little loser, that’s why no one likes you or talks to you.

Donald Trump is an asshole on a daily basis.

You know, it really doesn’t matter what the media write as long as you’ve got a young and beautiful piece of ass.

My 10-year-old is a gymnast and thinks she’s better than everyone else.

I can beat everyone on the vault, I’m better than the older girls too. -10 year old.

Trump thinks he’s better than everyone, superior in every way. He is running for President, I guess that’s a good example. 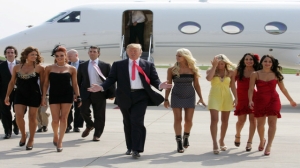 Sorry losers and haters, but my IQ is one of the highest—and you all know it! Please don’t feel so stupid or insecure, it’s not your fault.

Donald Trump makes racist statements it seems every interview he does.

My 10-year-old loves to boss her sisters around, she treats my youngest like a slave.

Go get my blanket, tablet, and pillow from my room.

Donny is obviously bossy, he is a boss and always telling people what to do.

They can go fuck themselves. -Donald Trump

My daughter lies constantly and she’s extremely bad at it.

Since the campaign trail began for Donald Trump it has been found he is truthful only 1% of the time.

My little girl whines, she pouts, she cries, and she freaks out for very little reason at all.

Trumpy likes to act like a child and has done so in public on several occasions.

The similarities are astounding, it brings me to one conclusion. Donald Trump is a child.