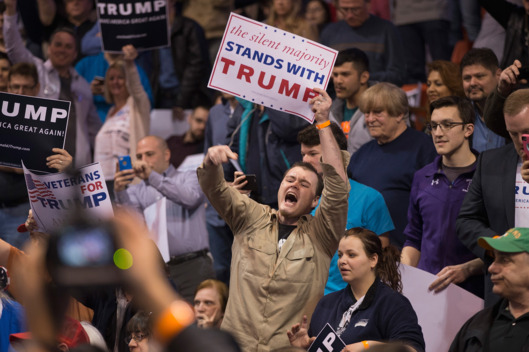 I grew up in a suburb about 10 minutes from Chicago called River Grove. I lived in the city of Chicago as an adult for a short time with my family. I have never been prouder of my city after watching the protestors stop a Trump rally, pretty impressive Chicago. The only problem was the violence, that is completely uncalled for. Hate makes people pretty heated and crazy. I can’t believe what’s happening. If you’re going to protest something you can’t be violent, no matter what the opposition says.

I have seen some insane comments from family, friends, and strangers. The majority of my family and friends are in Chicago or the vicinity. Some of my family and friends were praising the protestors, happy to stop the hate the Trump rallies bring. Most not condoning the violence, but happy no one was seriously injured and Trump was stopped. We do live in a free country and Donald Trump should be allowed to speak, even if a large majority of it is hate. We have that right to say what we want, that is why I’m allowed to write this today.

Trump was able to go on stage he chose not to. “I spoke with law enforcement and made [the call to cancel] in conjunction with law enforcement, and I think we made a wise decision,” Trump said in a phone interview on MSNBC. He was afraid for his safety it had nothing to do with the Chicago police department in a statement Chicago Police Department spokesman Anthony Guglielmi told the Associated Press that the department did not recommend Trump call off the event and said they had sufficient manpower to cover the rally. Guglielmi said that the decision to shut down the event was made “independently” by the Trump campaign.

Some of my family and a few friends support Donald Trump. The reason I’ve been given by some for supporting this insane billionaire is “he speaks the truth”. They love the fact that he is uncandid and says what he feels and what he wants. Anyone who supports Donald Trump hates President Obama. Many have said “He’s not a pussy like Obama” or “No one will fuck with us if he’s our President.” for why they support this barbarian. Some supporters are angry with the Republican Party. They look at this as a slap in the GOP’s face. 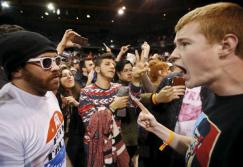 A Trump supporter (R) yells at a demonstrator (L) after Republican U.S. presidential candidate Donald Trump cancelled his rally at the University of Illinois at Chicago March 11, 2016. REUTERS/Kamil Krzaczynski 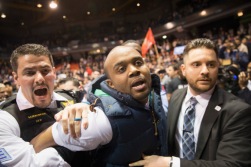 CHICAGO, IL – MARCH 11: An activist is removed by police after it was announced that a rally with Republican presidential candidate Donald Trump at the University of Illinois at Chicago would be postponed on March 11, 2016 in Chicago, Illinois. Organizers postponed the rally citing safety reasons after hundreds of demonstrators were ticketed for the event. (Photo by Scott Olson/Getty Images) ORG XMIT: 608579555

I decided to take it to social media. I contacted a Trump supporter and a Democrat to look at the differences. I asked the same basic questions. Here are the answers I received. I decided to leave both parties anonymous even though they both agreed to be public. I do not know either of these people personally.

Who will or who did you vote for in the primary election?

Trump Supporter: “Michigan already had its primary and I voted for Donald Trump.”

Democrat: “I am ………, retired professor, and I plan to vote in the Pennsylvania primary as a Democrat. I support both Senator Bernie Sanders and Secretary Hillary Clinton. Our primary is not an early one, and so I have not yet made a final ballot box choice.”

What makes your chosen candidate/party the choice for you?

“I have several reasons I will list them out. 1. I believe that there isn’t any other candidate that understands the global economy like he does. The others have ideas on it but ZERO experience in it.

2. Trump is right our current trade deals are all in favor of other countries and have created jobs in other countries and not in the US.
3. Trumps business tax plan is enticing for businesses to start investing in America again and not other countries
4. I like the fact to go along with his lower business tax plan he will also imply tariffs on good brought into this country in order to force fair and equal trade. I have been to other countries and finding something there that is American made is damn near impossible.
5. Trump is right about other countries making their currency fluctuate which causes US jobs to be outsourced to other countries. Let me give you a perfect example of this. 4 years ago a friend of mine was hired into an Automotive OEM and his job was to localize sourcing parts to be made here in the US to build the vehicles (if you check 4 years ago the currency of the other countries was more on par with the US dollar). Now he is tasked with outsourcing the parts to be made in other countries because the cost is cheaper.
6. Trump is also right about the illegals flooding our country. The illegals cost this country billions per year in services intended for American citizens. Also since they work for cheaper labor it suppresses wages from going up.”

Democrat: “I believe that only the two Democratic candidates have the moral and intellectual seriousness and good will to serve. The Republican candidates seem to me unqualified — and worse.”
Do you normally vote, and if so what party do you normally lean toward when voting?

“Yes I normally vote in elections because I want our country to be great and it can only do that if the right leadership is in place. As for which party I normally vote republican or libertarian.

I believe in holding our elected officials accountable
After all they work for us. However it seems today that both the democrats and republicans seem to treat us like we work for them”
Do you always vote for the Democratic Party?

Democrat: “Yes, starting with John F. Kennedy in 1960.”
I asked both people what they thought of the other parties “extreme” candidate.
What do you think of Bernie Sanders?

“I have a lot to post on this so I will do it in pieces. I don’t think very highly of Bernie Sanders. I think Sanders if gathering supporters by promising “free stuff” (college, healthcare, etc..). Sanders tax plan is extremely punitive in nature as the more successful you are the more his plan punishes you with higher taxes. We currently have a system like that in place now but Sanders plan is much worse and as somebody in the top tax bracket under Sanders plan I would pay another $17k a year in taxes.
Sanders is a socialist and socialism has failed in all other countries. Socialism creates a culture of laziness.
Sanders proposed business tax plan would drive even more businesses out of this country. I read his plan and then I have read some reviews on it and several analyst have said his plan would cause a -9.5% GDP. For those who though 2008 economy was bad that is nothing compared to -9.5% GDP.
Also I heard and read Sanders comments about the violence in Chicago yesterday that shut down a Trump rally. Trump isn’t to blame for that as his supporters weren’t the ones being violent until they were attacked….. That comment pushing people to continue to do the same thing at other Trump rallies made me lose all respect for Bernie.”
What do you think of Donald Trump?

Democrat: “Donald Trump, who seems to me a clever narcissist and a con man, has called up some of the worst forces in America — bigotry, hatred, violence, xenophobia, racism, homophobia. His supporters are at least as scary as he is.”
Just because I can I will disprove all of the Trump Supporters claims….
1. & 2. Trump trades with countries we shouldn’t be trading with such as China and Mexico. He has his products made by slave labor. He is not making his own products in the US why would we trust him with everything.
3. & 4.  reasons why he supported Trump was the tax plan and money issue. Unfortunetly for him they’re all bad ideas according to anylasts and fact check.
Fact Check. Is Trumps Tax Plan Neutral?
5. This is the same as the other two reasons really. I think what our young supporter is talking about is the North American Free Trade Agreement and Trans-Pacific Partnership. This is what Bernie Sanders is trying to get rid of as well, but he’s called a communist for wanting to do the same thing.
You can decide for yourself who you are voting for, but spreading fear and hatred in either party is not the answer. The protests are great if they’re not violent. There has been violence at many political rallies recently and that’s just sad. If people can not discuss politics without beating the shit out of each other we’re no better than Taiwan.