The most unforgivable American contribution to world culture has to be the televangelist (The cockroaches of society). While these devious creature’s normal habitat includes mansions, private islands,  and Republican events, they can also be found in a mess of controversy and scandals. If you want to see the scum of the earth turn on a the Christian networks to catch a televangelist. Not only have many been caught in scandals they are insanely wealthy.

Joel Osteen is one of the most well-known of the hustlers. This man has no formal religious education, a college drop out, and had a fear of public speaking. Osteen’s father began the church that is highly publicized now prior to his death it was peanuts compared to the empire Joel grew. One critic called Osteen’s style of sermons cotton candy preaching. Which simply means no depth. Either way he preaches for money, not for his love of God. He does not take his salary any longer, but he doesn’t need his measly salary his books racked up way more than he actually claims his net worth is. Osteen’s books and merchandise racks in 55 million per year. Osteen, ” claims an individual should not feel guilt for possessing lots of material wealth. Instead, one needs to thank and praise God for the acquired wealth.” His estimated net worth is $40 million.  Joel Osteen Net worth

Joyce Meyer, not to be outdone by Joel she has a respectable net worth of $25 million. Has been involved in a scandal. Back in  2009, Joyce’s bodyguard , Christopher Coleman was charged with strangling his wife and their two sons (9 and 10). Coleman was having an affair with a woman and was making 6 figures a year as the security chief to Joyce’s entourage. The ministry had a no-divorce policy, which meant if Coleman divorced his wife he would be fired from his job. The family of the slain mother filed a wrongful death lawsuit against Meyer Ministries. The woman Coleman was having an affair with traveled with the circus. The family alleged not only did Meyer know of the affair, but know their own policies, yet allowed it to go on.  The case was dismissed by the judge. When asking Joyce about her greed (she has a $10 million dollar jet) she simply stated that she doesn’t have to apologize for being blessed. Celeb Net Worth

Janice and Paul Crouch, these two are real bottom feeders they are the co-founders of Trinity Network. Their own granddaughter sued them for $50 million dollars. Claiming she was fired after discovering  illegal financial schemes’. Her lawsuit follows a previous suit by a former employee. The couple defrauded the ministry and paid for many different things such as 13 mansions, trips, private jets, a $100,000 trailer for Janice’s dogs. There are several extravagant things according to the lawsuit that the money was spent.  This case was also dismissed. Apparently money does really buy freedom. Paul has passed on luckily, but the crazy pick haired lady is 78 and still kicking, Janice has a net worth of $50 million. Jan Crouch Net Worth

Benny Hinn is another swindler that pimps the name of God for his sick love of money. He preys on the weak to make his cash. Benny is not only a preacher but a faith healer as well. He basically tells people to give them their money and they’ll be debt free. He has said he has cured Cancer and other diseases. People actually buy the load of crap he is selling. He is the lowest of the low to prey on sick people. You are not a man of god, you are a man from hell. Evil in the worst sort of way. Hinn was a part of a scandal, as a married man had an affair for 4 years with another televangelist (Paula White). It eventually came out. Benny’s net worth is $40 million. Benny Hinn Net Worth 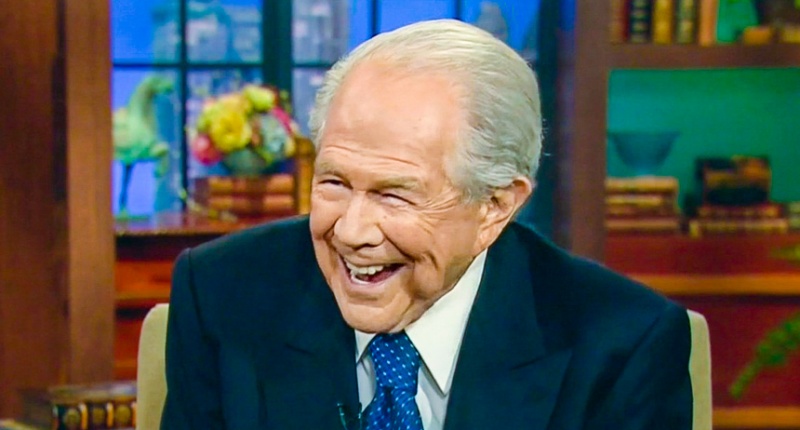 Pat Robinson, is a  manipulative old bastard, he’s so old I would need to write a book on all the scandals and dirty dealings of this son-of-a-bitch. In the 70s and 80s, he was a faith healer. Robinson claimed he could cure AIDS at one time with his prayer. Robinson is currently on The 700 Club, a Conservative Christian television show. In 86′ in an interview with The New York Times, Robinson called non-Christians  termites. Pat is a very controversial man, to say the least.  The ignorant jerk is anti-Muslim, anti-Hindu, anti-Protestant, anti-Abortion, anti-gay, anti-feminism, and anti-liberal. The words he uses when spreading his hate are quite disturbing for an old-timer he sure is opinionated as hell. Pat’s net worth is said to be $100 million to 1.9 Bil. Pat Robertson’s Net Worth

Jerry Falwell was one of the biggest mouthed hypocrites before his death in 2007. Falwell was a strong supporter of keeping God in schools and had some choice words after the Supreme Court announcement of Church and State separate. Clearly, Jerry was not a fan of  the Constitution. He flipped out over porn, children’s shows, and anything he could judge. Falwell took Hustler magazine to court and sued for $45 million in suffering after a satire article was published in the magazine  implying an interview with Falwell where he describes having sex for the first time with his mother in an outhouse. The court awarded Jerry $200,000 instead. Larry Flint (Hustler Magazines’s CEO) appealed all the way to the Supreme Court and won in a unanimous decision. Freedom of Speech, still in the Constitution. When Jerry Falwell died he had a net worth of $10 million. Jerry Falwell Net Worth

Televangelists are the lowest form of scum on the planet. They lurk in the television and use their viewers money for their own selfish luxurious lifestyles. The Senate inquired many televangelists regarding their spending and they all avoided tax penalties. The slippery bastards got away with their scam. If you or a loved one have fallen into this please help or run. You don’t need to send someone money to be saved. If you’re a good person you don’t need someone telling you how to live or what to do. You don’t even need a church to pray certainly don’t need a television to do it. If it makes you feel better fine, but these people are not men and women of God.